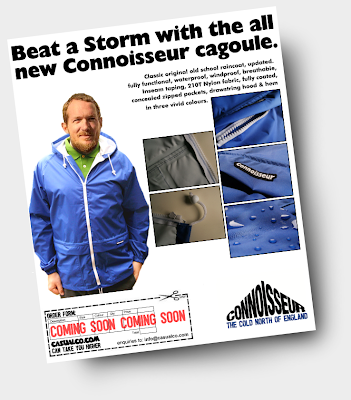 As those who read this blog regularly will no doubt know, here at Jimmy Jazz we are big fans of the iconic cagoules of the eighties. Izod Lacoste and Patrick both became famous for their efforts but king among them were the Peter Storm cagoules – true icons of terrace style which became famous when worn by match going lads during the explosion of casual culture in the late seventies.

Therefore it'll come as no surprise to you that when we heard that the Casual Connoisseur would be producing a direct replica of the Peter Storm cagoules we soon became suitably interested. The original cagoules were indeed fairly innovative at the time with such advances as increased breathability, the Connoisseur cagoule will be updated yet further with several technical advances being used to bring a new slant to this classic piece of outerwear.

While some of you may immediately think that these are little more than a rip-off of the original efforts, they do indeed have the blessing of Mr. Paul Bibby – Noel Bibby's son and successor at Peter Storm until its takeover by Millets. He's even gone as far as to give them the manufacturer's he used and personally we think it's nice to see a label go about a reinvention in the correct way.

Details are scarce at the minute but we believe that the cagoule will be available in three different colours. Any preferences, anyone?
Posted by Jimmy Jazz at 10:49